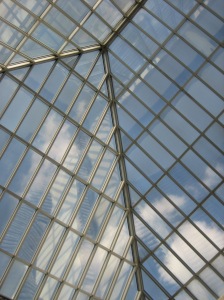 There is a Japanese word, ri, which which could be translated as “the underlying principles of the cosmos”. It might be easier to understand with examples. Ri denotes an apparent pattern in what is random, like the lacey froth of a receding wave, the puzzle-like bark of a Ponderosa pine or the shape of flames. We recognize natural shapes, whether a type of plant, or a mineral or a cloud by such apparent patterns, though none are measurable, none are ever really the same.

In contrast, the manmade geometry of an urban grid would seem to be a far cry from ri, a metaphysical opposite perhaps. A skyscraper is certainly measurable, its pattern is undeniable and we needn’t look through half-closed eyes to see it.

Yet catching light and shadows as the walls of a canyon would, the colossal towers of a city draw our eyes upward rather than to the horizon, and we are able to see what is behind us and above us as the buildings disappear into a prismatic heaven. How marvelous that so much mass, instead of obstructing the sky, becomes the scaffolding for flying white canopies or darkening storms!
In this way even the strictest urban geometry bows low to nature and the rippling random patterns of ri.